“True patriotism is born, not of pride but of humility.  It is supported by love of mankind not merely one part but all humanity.  That God is our Father and that all men are brethren.  This ‘oneness of humanity’ must be inculcated in the minds of the people, ere we shall have everlasting peace…” 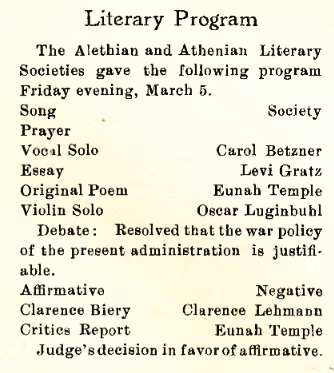 As World War I began in July 1914, Bluffton College and Mennonite Seminary was just over a year into its new existence, having dissolved Central Mennonite College in spring of 1913 in favor of a reorganized institution with a new name and a new board of trustees.  The Witmarsum, the campus monthly, was even younger, having published its first issue in October 1913 after students returned to their “new” school to begin classes.

The conflict in Russia and Europe was slow to enter the campus conversation, at least as far as reported by the Witmarsum writers.  It wasn’t until the March 1915 issue when the war appears to begin influencing campus activities.

On March 5, the Alethian and Athenian Literary Societies joint program featured a debate on President Wilson’s war policy, with Clarence Biery arguing successfully for the affirmative.

A Peace Oratory contest was announced for Tuesday, March 30, in which five students from Boyd Smucker’s Public Speaking course would discuss Peace and War in a public event in the college chapel, the winner earning a chance to speak at a state contest.  That winner was Waldo Schumacher, who presented “The Peace Problem,” which won him first place by unanimous vote of the judges. The Witmarsum printed a photo of Schumacher along with excerpts from his winning speech. 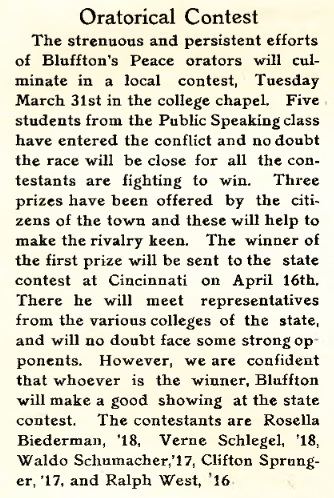 “Countless millions of dollars have been and are being spent annually in order to appease the war god. For his sake our own country sacrifices seventy per cent of all moneys collected by the government while one per cent is spent for promoting agriculture. Instead of melting our swords into plowshares, as the prophet tells us shall someday be done, we are actually melting our plowshares into swords. Is it just and honorable that such sums should be spent for warfare and an in­significant sum for agriculture, although the prosperity and very existence of the country depends, not on the man behind the gun but on the man that follows the plow? How much woe and misery could be averted if these sums were spent to better feed and clothe the poor, to better educate the masses and to combat sickness and vices...”

Schumacher would eventually serve with the United States Army, at the Base Hospital of Camp Sherman in Chillicothe.

“The war is a hard test for a Mennonite Institution.  Opposition to war is written deeply in the history of the Mennonite church.  Love of country, and loyalty to it is equally deeply rooted, especially in the student body at Bluffton College…”

This quote from President S.K. Mosiman’s remarks in his annual report to the college’s board of trustees hints at the difficult position in which Mosiman found himself as the Great War waged on.  Representing a more progressive approach, and concerned for institutional safety and survival, the college’s leader walked a careful line.  Mosiman defended traditional pacifist principles where they applied, refused to give credit to army service, and spoke proudly that by May of 1917, there remained no enlistments from the Bluffton rolls.  Mosiman encouraging draftees to cooperate with officers and to advocate for their own rights to noncombatant service.  In writing to his friend, Ohio Governor James M. Cox, Mosiman offered the college’s support of the war effort at home, including with Y.M.C.A. and Red Cross activities and through campus war fund contributions.