Lincoln Hall's cornerstone was dedicated in a public ceremony on June 14, 1923, as the ground floor of the new men's dormitory was beginning to take shape.  Workers for the Lincoln Hall demolition project safely extracted the cornerstone on December 19, 2018, and transferred the stone and its time capsule to the University Archives.

A public exhibition of the time capsule's contents was on display for May Day and Commencement weekend, May 3-4, 2019.  This guide highlights the contents in more detail.

Watch as Carrie Phillips, archives and special collections librarian, opened the time capsule from the Lincoln Hall cornerstone in December 2018. 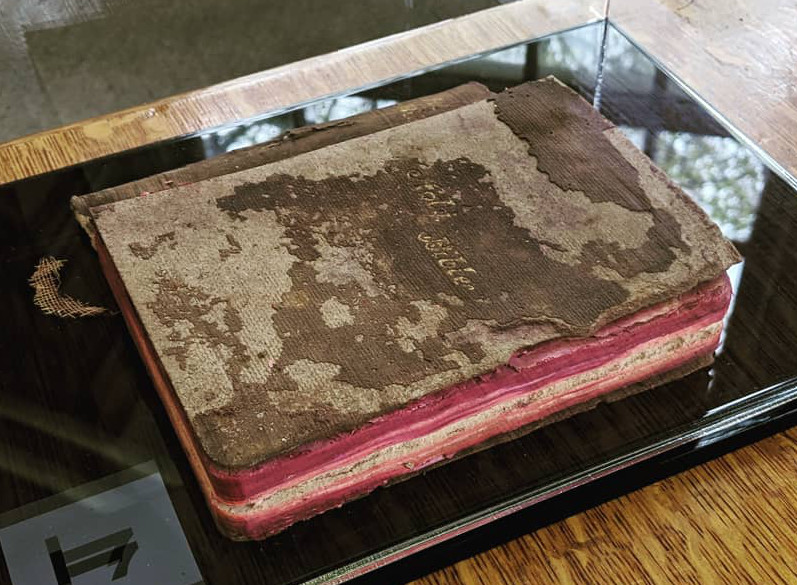 Armin Hauenstein was a Bluffton resident and brother of Professor Sidney Hauenstein.  Together, the Hauenstein brothers established and operated a town pharmacy for many years.  Armin served as Bluffton’s mayor from 1926-1928.  Armin’s wife, Helen Todd, was a Bluffton graduate from the class of 1924.

The Bible was at the top of the stack of materials in the cornerstone time capsule.  Like many Bibles, the edges of the pages in the text block may have been dyed red, and over time and with exposure to moisture, the red dye bled down through the stack of paper materials, leaving behind the magenta stain that can be seen on most of the time capsule items. 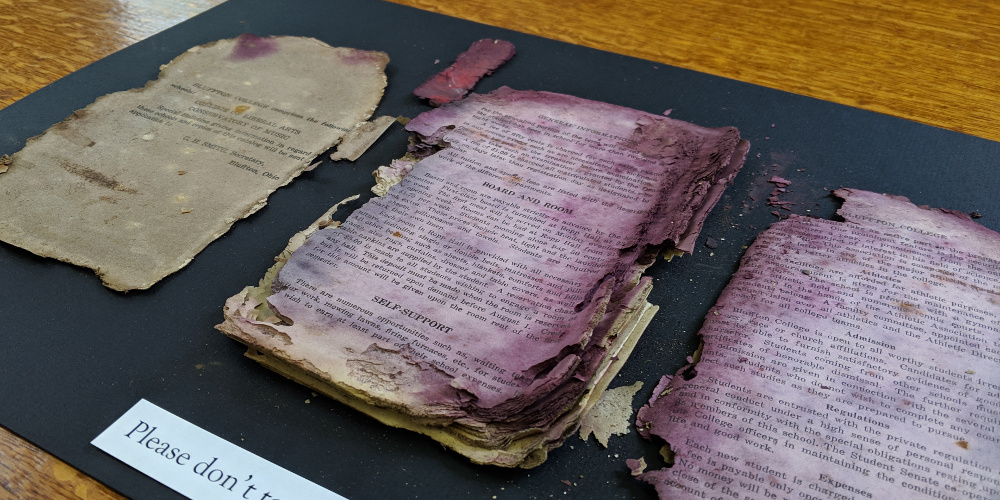 Two issues of The Witmarsum were included in the cornerstone's time capsule:

December 21, 1922:  A "Special Dormitory Issue" devoted to Lincoln Hall and the dormitory campaign 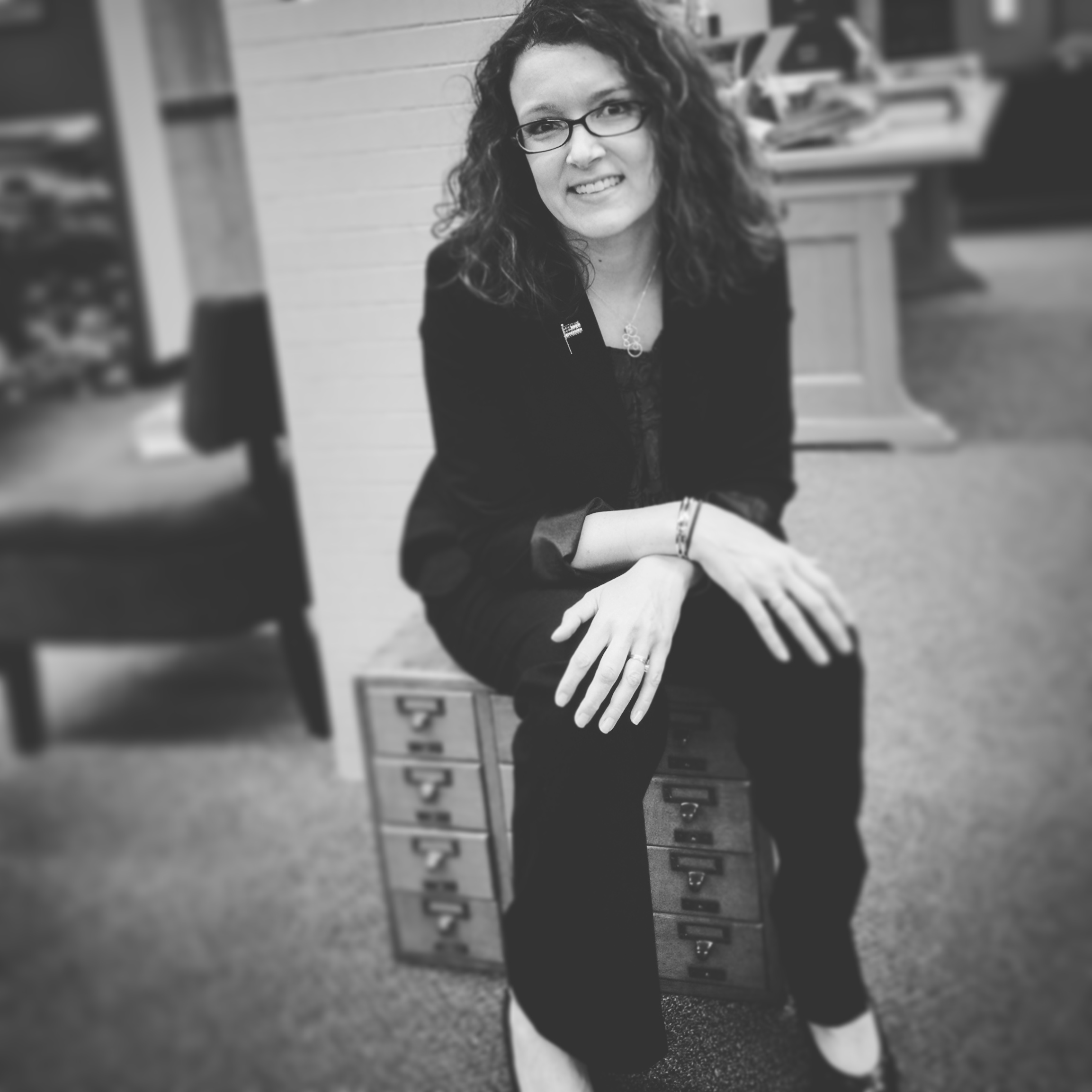 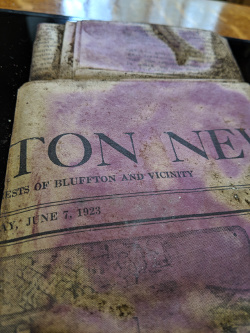 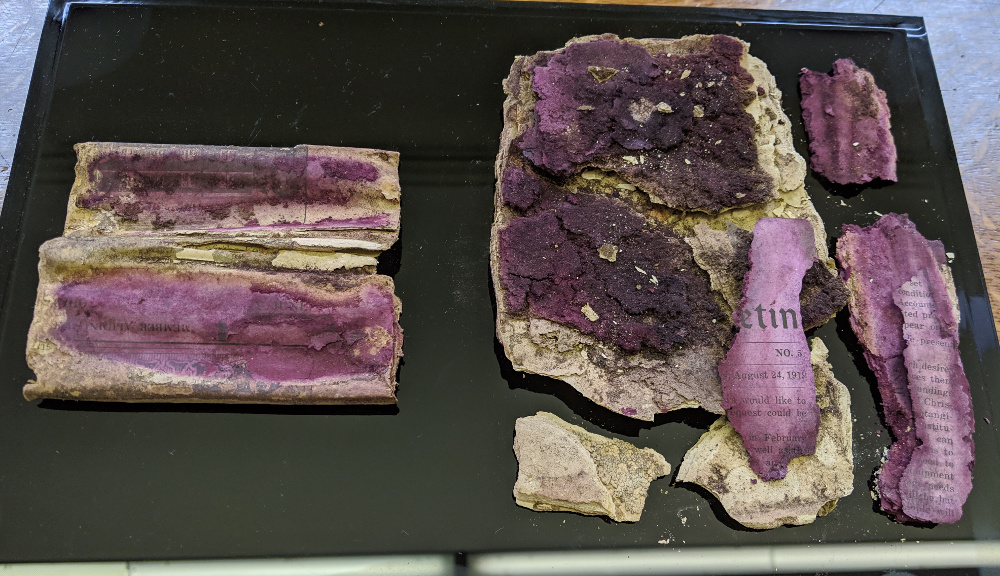 The Bluffton Alumnus, November 7, 1922  -- #6 on the contents list, pictured partially rolled at left.

The Bluffton College Bulletin, June 1920 -- #7 on the contents list, likely part of the fused paper at right.

The Bluffton College Bulletin, August 1922 -- #8 on the contents list, likely part of the fused paper at right.

Bluffton College received an unsolicited cash donation of $200 from the Algemeene Doopsgezinde Societeit, a Mennonite organization in the Netherlands, thanks to J.W. Leendertz, a friend of President Mosiman.  The Witmarsum reported, "This contribution is perhaps the most outstanding of all the donations received in the dormitory drive because it reveals the personal interest of the European Mennonites in the educational plans of the Mennonites of America."  In thanks, the Bluffton College Board of Trustees issued the following resolution and included a copy of the resolution in the cornerstone time capsule. 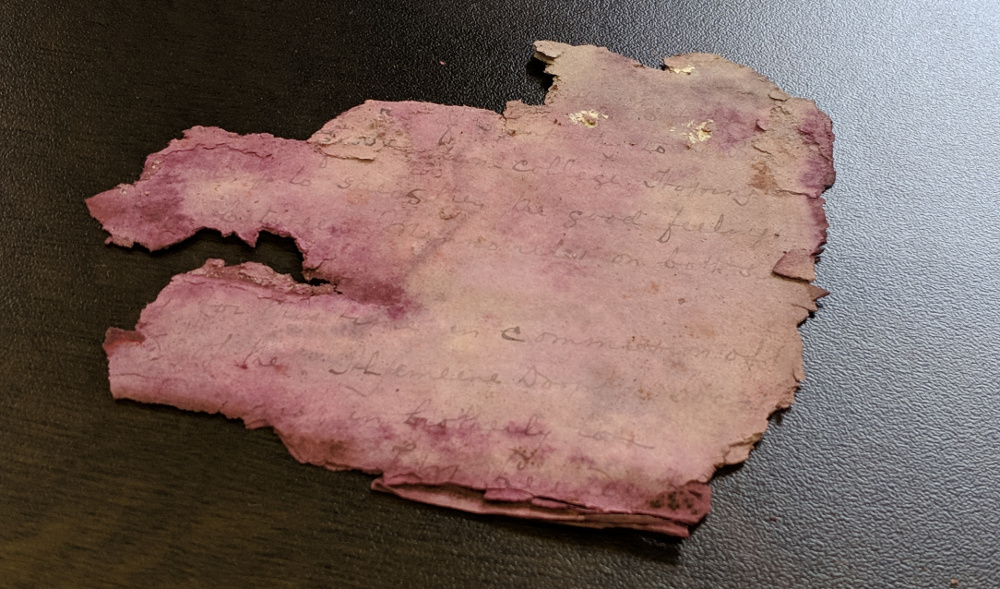 RESOLVED, by the Board of Trustees of Bluffton College, that we express to our Brethren of the Algemeene Doopsgezinde Societeit of Holland our very deep appreciation of the generous gift sent by them as a contribution toward our new Men’s Dormitory and that we extend to them our assurance that it is accepted as a renewed token of our mutual sympathy and kinship.

The Board of Trustees of Bluffton College 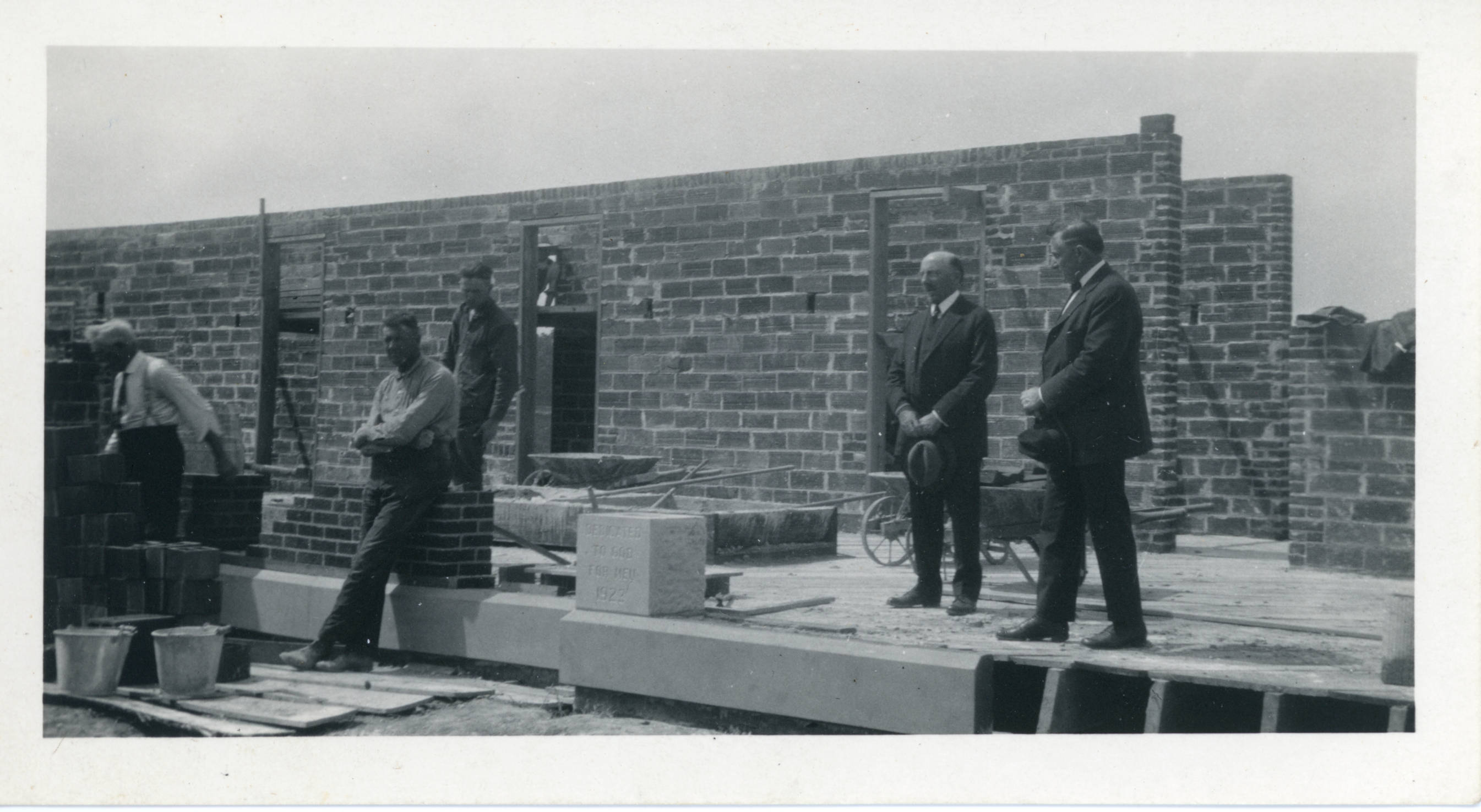 President Mosiman and others gathered for the cornerstone ceremony on Thursday, June 14, 1923.

Maurice Monroe “M.M.” Murray was known as “The Granite Man,” according to his business card.  Murray was a Bluffton resident and, in addition to his monument business, held several positions in village leadership, including postmaster, police marshal (1892-1896), and mayor (1918-1922).

Watch ye, stand fast in the faith, quit you like men, be strong. (KJV)

Keep alert, stand firm in your faith, be courageous, be strong.  (NRSV)

1 Corinthians 16:13 was the inspiration for the engraved motto, "Quit Yourselves Like Men." The original Greek verb, andrizomai, means, "to render brave, or manly."

Emerson C. Stultz and his wife, Daisy, were Bluffton residents.  According to an obituary published in The Courier (Findlay), Stultz had been employed by the Bluffton Slaw Cutter Company and was a sheet metal worker by trade. 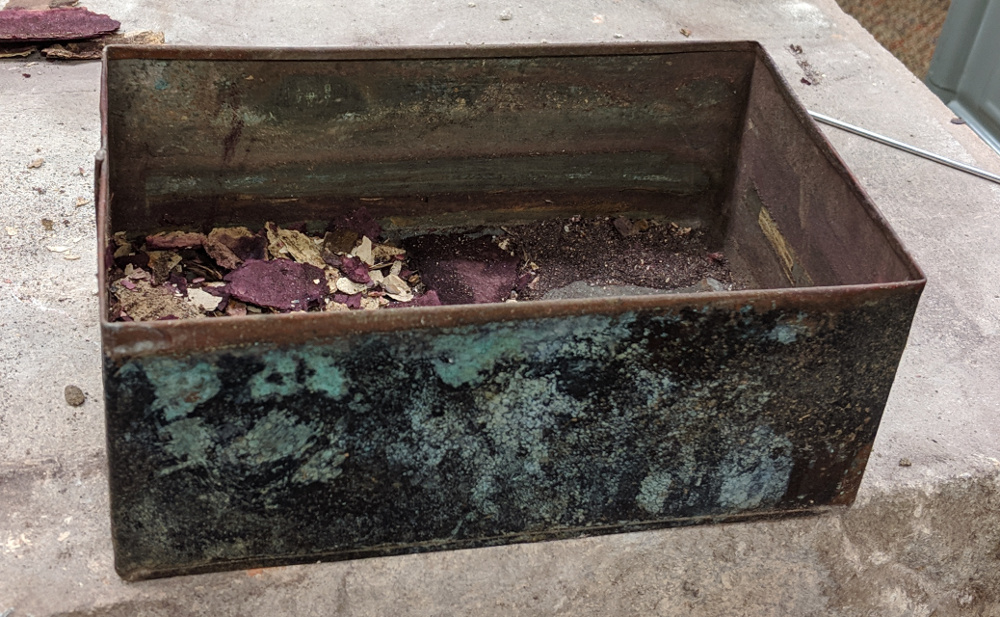 The copper time capsule box, just after removal from the stone.  (Lid not pictured)

The cards bearing the names of the committee members responsible for the Lincoln Hall project were not identifiable among the items recovered from the cornerstone.  Here are the dormitory committee members as reported in the Witmarsum:

Three coins were placed in the time capsule as examples of the day's currency: