Welcome to the History Sandbox, a place for the Archives & Special Collections staff to test online exhibits and experimental features! Try a puzzle, explore "Beaver Archivist" opportunities, and more.

May Day at Bluffton University

For those alumni who have grown to love Bluffton's May Day tradition for more than a century, a quote from the May 1915 issue of The Witmarsum might best sum up the tradition:

Everybody is looking forward to May Day. It is one of the most important features of school life. Without it a school year would be incomplete... May is the month of flowers. It is the time when nature bursts forth in its wondrous beauty and glory. It is the time when we can say with Solomon of old—“For, lo, the winter is past, the rain is over and gone: The flowers ap­pear on the earth, the time of the sing­ing of birds is come..."

May Day festivals and maypole dances are customs with rich history.  According to that same issue of the Witmarsum, "The question comes to us, Whence came such a custom? For answer to this, we must go back to the Druids in England. It was their custom to light bonfires on the hills on May Day to welcome the spring. On the eve of the day the young men of each village, both in England and on the continent went to the woods and cut a May pole, which was decorat­ed and set up it some open place and the following day all the people danced about it."  Wikipedia authors cite many roots of the tradition, including Classical Roman, Gaelic, Germanic, and Catholic connections.  For a time, Bluffton shared in the May Basket tradition connected to May 1, a day which is also observed as "May Day" and relates to international labor and work concerns.

The May Day tradition at Bluffton University dates back to Tuesday, May 24, 1910, when a chatauqua-style public assembly was held on the 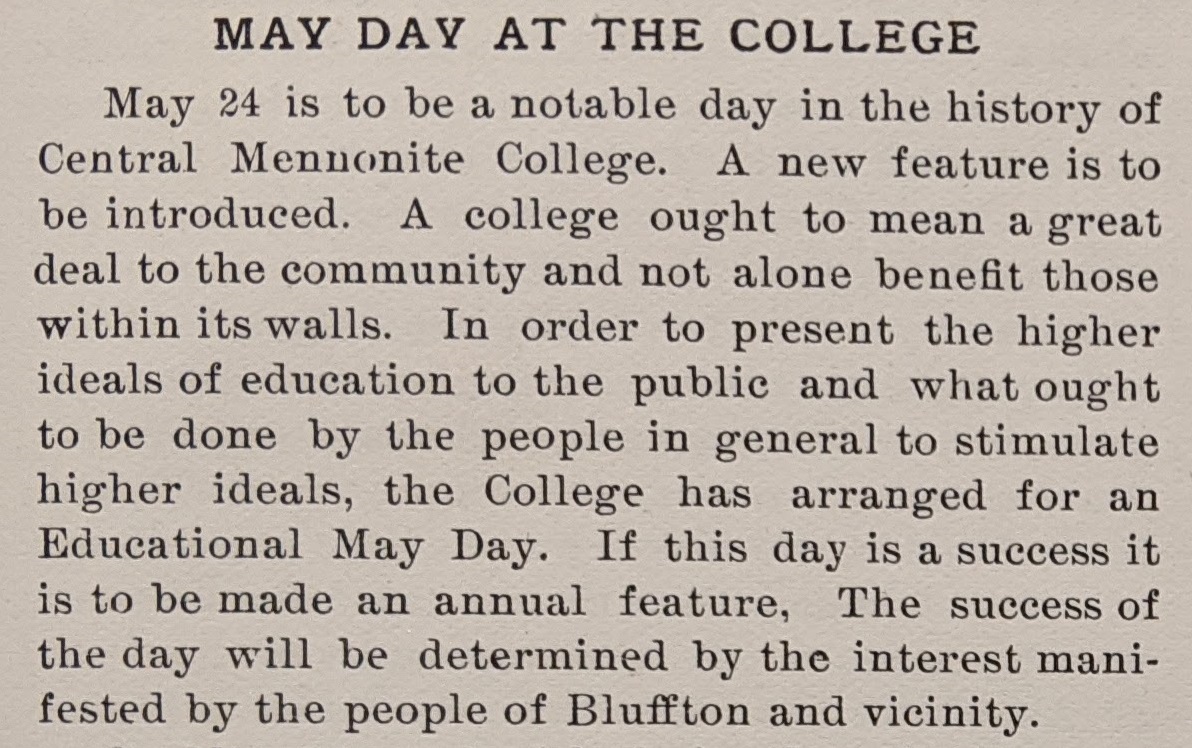 grounds of Central Mennonite College.  Invited speakers addressed the assembled crowd on the topic of education; they included:

“The present trend in education and what people ought to do to stimulate it”  by Honorable John W. Zeller, Commissioner of Schools

“Culture and Character” by Professor John Davison, Superintendent of the Lima Schools

“The Future of the Rural Schools” by Professor James E Begg, Superintendent of the Columbus Grove Schools

The Bluffton Citizens Band entertained those in attendance, and a tennis tournament was held.  Central Mennonite College's Lowell Literary Society held a meeting. 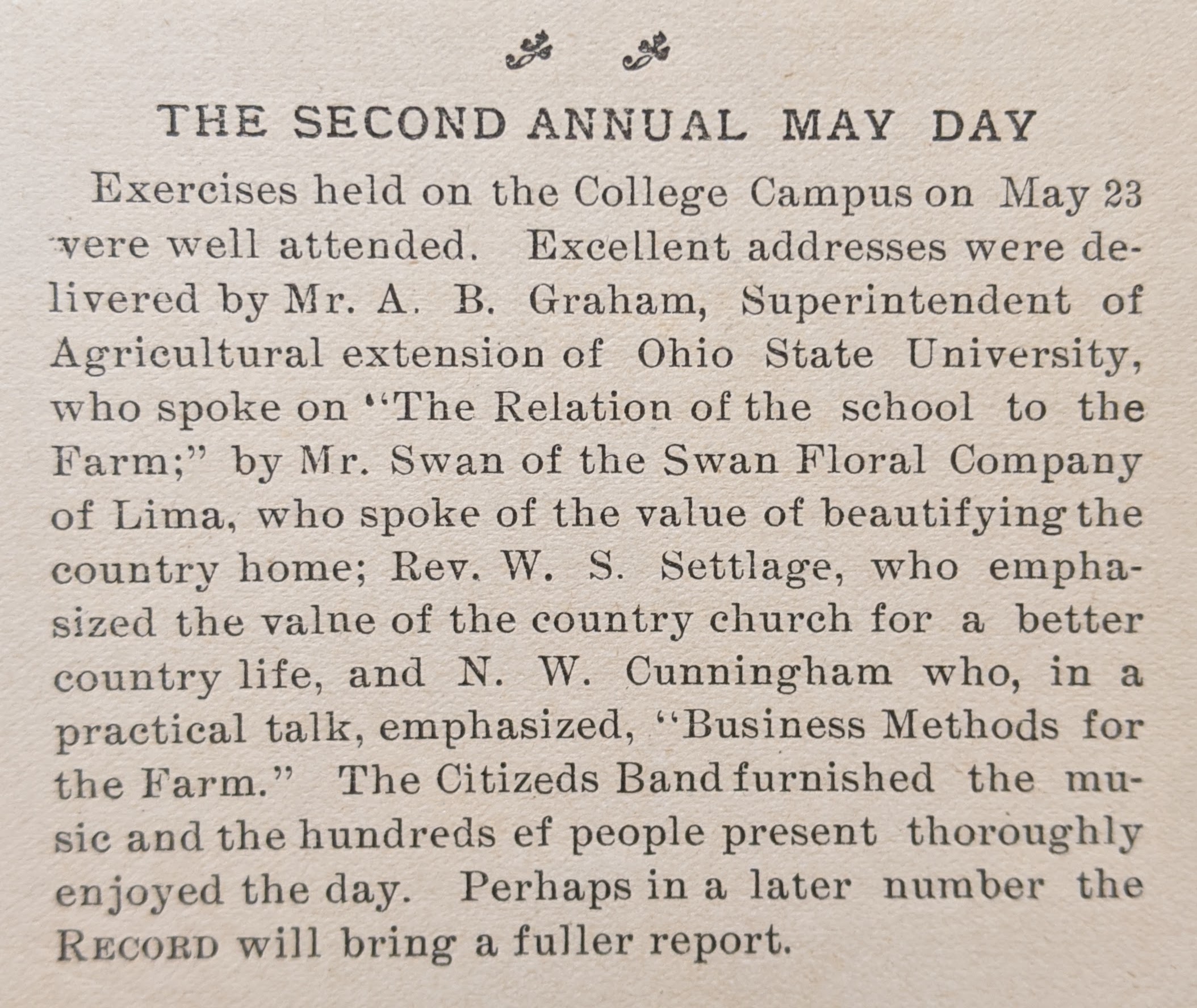 The following year, a second, similar May Day event was held on Tuesday, May 23, 1911, with a theme of agricultural education.  Speeches included: “The Relation of the School to the Farm” by Mr. A.B. Graham, Superintendent of Agricultural Extension of the Ohio State University; “The Value of Beautifying the County Home” by Mr. Swan, Swan Floral Company, Lima, Ohio; “The Mission of the Country Church for Better Country Life”  by Rev. W.S. Settlage; and “Business Methods for the Farm” by Mr. N.W. Cunningham.

The Bluffton Citizens Band and the College Quartet provided music for the event.

Three years passed before the college instituted the more familiar May Day tradition as we would recognize it today, with a maypole dance, the crowning of royalty, and theatrical entertainment.  Miss Viola Welty was crowned the first May Day Queen during a ceremony on Friday, May 29, 1914, on the College Hall lawn. The June 1914 issue of The Witmarsum reported,

Without doubt one of the most memorable days to the students of Bluffton College as well as to the residents of Bluffton was May Day, ob­served May 29. A beautiful day and the campus made gay with colors of white, pink and green and prettily decorated booths, greeted the students and their friends as they gathered on the green.  After the singing of the Alma Mater by the students, a bugle call an­nounced the coming of the queen and her procession. Miss Ethel Steinman, maid of honor, lead the procession and crowned Miss Viola Welty as Queen of May upon her arrival at the beautiful throne erected on the College lawn. Those making up the Queen’s train were, Dorothy Benroth, crown bearer, Florence Hahn and Josephine Ford, train bearers, Edith Rogers and Kathleen Lugibihl, flower girls, Misses Marie Balzer, Martha Baumgartner, Huldah Moser and Carol Betzner, attendants and the May Pole girls. Miss Welty, dressed in robes of white and wearing a beautiful crown of flowers made a very pretty Queen as she sat upon her imposing throne. After a few selec­tions by the attendants to the Queen of May, the May Pole Girls, upon curtseying to the Queen, very prettily gave the winding and the unwinding of the May Pole.

Then followed several clever stunts given by the different organizations in the order called off by Prof. Detweiler: Y. M. C. A., Literary Societies, Academy, Press Club, Y. W. C. A., Faculty and Ladies’ Basketball Team, Baseball Game and the Tug of war over Riley Creek. Perhaps the most unique of the stunts of the afternoon was that one given by the Y. M. C. A.: a demonstration of a human pipe organ, by Prof. Lehmann. The baseball game also afforded quite a bit of amusement and even anxiety as to who would win the game. A luncheon ended the program of the afternoon. At 6:30 o’clock the Queen and her followers, in autos, headed by the College Band, paraded through the streets of Bluffton and then returned to the College grounds for the evening’s program. The Queen and her train marched to the throne and there followed the winding and unwinding of the May Pole and the stunts of the evening. The Freshmen, Sophomore, Junior and Senior classes each gave a stunt. A pantomime of “Hiawatha”, to have been given by the Oratory class on the banks of the lagoon, promised to be the crowning feature of the evening, but a sudden storm interrupted the action when it was only fairly begun. Thus ended a thoroughly enjoyable day.

Reporting in the May 1915 issue of The Witmarsum suggests that the May Day events from 1914 were held, in part, to provide fundraising for the YMCA and YWCA organizations so that they could send representatives to the annual national conference in Eagles Mere, Pennsylvania.

One year ago Bluffton College cele­brated its first May Day and it proved a wonderful success. All who attended it were well pleased. The proceeds, amounting to eighty dollars, defrayed the expenses of two delegates to Eagles Mere. This year, the Y. M. C. A. and the Y. W. C. A. are working in co-operation and there is no reason why May Day should not be a great success. The dif­ferent committees have been appointed and are busy at work. Our May Queen, our maid of honor and attendants are chosen. A very interesting play called “Every Boy and Every Girl,” in which twenty-five characters take part, will be given. A May pole dance, several stunts by the various classes and organizations and an enthusiastic ball game will be among the features of the day. Everybody has something to do and if everybody works faithfully in their place, whether it be great or small, we will have a May Day Festival of which we will ever be proud. From the proceeds, delegates, both from the Y. W. C. A. and Y. M.! C. A. will be sent to Eagles Mere, to attend the annual student’s convention.

No evidence has been found to explain why this type of celebration was chosen, though these types of celebrations were popular in the early part of the 20th century.  The Bluffton University Archives staff continues to search for the answer to this question.

Monday, May 24, 1915, brought the return of the May Day celebration.  The June 1915 issue of The Witmarsum reported on the day's success:

We had been hearing so much this year of the wonderful success of last May Day and the anticipation of a greater success this year. Now our anticipations have become realizations and we have indeed had a greater May Day... Nature could not have pro­vided a more beautiful morning than greeted us May 24th. It was an ideal May day and the opening of the booths the appearance of the queenly throne, the whole preparation for the coming of our May queen was not un­worthy of the abundant supply of sun­shine seemed to have been divined for us. This same great sun seemed to pen­etrate even the hearts of our college friends and draw them to the campus and large was the number of loyal on­lookers when the procession appeared bringing our loved queen, Miss Nettie Moser. She was attended by Carol Betzner and four attendants, preceded by guards and a herald; followed by train bearers, flower girls and the May Pole girls. Amid the rejoicing of her people she ascended her beautiful throne and was crowned queen by her Maid of Honor. The sun in his honored place and the queen upon her throne seemed to have the same purpose that afternoon, for by the inspiration given by both, the participants in the May Day fes­tivities seemed to do their very best. But when the queen descended from her stately throne just before sunset the rain clouds passed over. The persistent sun, however, drove the dark clouds away and freshness and warmth were ours for the rest of the day.

Moving forward, the May Day celebration became a steadfast part of Bluffton's set of traditions.  In 1917, the event was moved to Commencement weekend to be a part of the festivities of the close of the academic year.  In 2013, for the 100th performance of the maypole dance, a "legacy" pair of maypole dancers was added to the maypole dance. Because of the worldwide COVID-19 pandemic and the cancelation of on-campus events, 2020 will mark the first year in which the maypole ribbons will not be wound.